"Education is the key to economic and social mobility throughout the world. Community colleges, in particular, are in the best position to meet the educational needs of the members of our communities including transfer, career, and lifelong learning."  -Dr. Sanjay Rai 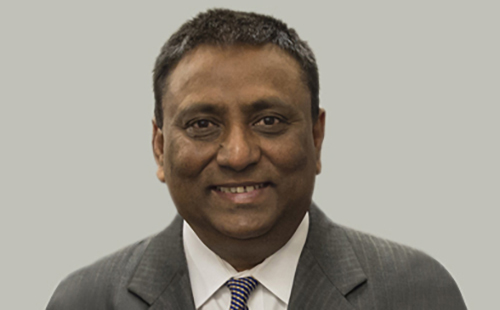 Dr. Sanjay Rai, senior vice president for academic affairs at Montgomery College, is an outspoken champion and ardent supporter of innovations that advance community college student success in academic, career, technical, and workforce development programs. Since his appointment to the SVP position in 2014, he has transformed the Academic Affairs Division, leading efforts to pursue grants and resulting in the College being awarded $25M in Department of Labor grants, as well as partnerships with business and industry (Amarex, InfoSys, BIOTrain) that led to the development of innovative workforce development programs in Cybersecurity, Information Technology, Data Science, and Cloud Computing. These successful partnerships have been recognized nationally. He also developed a collegewide academic structure which encouraged collaboration, innovation, and intensified focus on student success. He supported and encouraged development and use of open education resources (OER), and other student success initiatives including online degrees; the redesign of General Education, General Studies, and developmental education programs; the development of alternative placement processes; and the implementation of academic program advising, among others.

His priorities revolve around reducing barriers to student success and encouraging opportunities for innovation supporting student success.  The Achieving the Promise Academy provides resources for one-to-one engagement with academic coaches and focuses on gateway and challenging courses for underprepared students.  Grant funds increased participation in the Academy, and NSF, NIH, and FIPSIE grants increased participation and success of underrepresented students in STEM fields.

He has deepened partnerships with Montgomery County Public Schools (MCPS) through the development of the Middle College Program, and the newly created Early College Program being implemented in fall 2018.  The College won an RFP from MCPS that plans for a teacher preparation program for paraprofessionals, which is unusual for a community college.

Dr. Rai continues to build the College's global education and international education, business and industry partnerships started when he was invited to join then Secretary of State John Kerry, then Governor Martin O'Malley and County Executive Ike Leggett on the first of several trips to India which resulted in over $70M in partnerships for the County.

Prior to serving as the College’s chief academic officer, Dr. Rai led the Germantown Campus as vice president and provost. In that role, Dr. Rai assisted with the creation of the Pinkney Innovation Complex for Science and Technology which supports the Life Sciences Park providing an integrated academic, business, and research environment. This endeavor has been sustained over time, and in 2016, the College received the AACC Partnership Award for this project. In addition, the Paul Peck Academic and Innovation Building was completed during his Germantown tenure to address the burgeoning life science industry with 25 start-up companies working on projects and providing learning opportunities for our faculty and students. Dr. Rai led the construction of Holy Cross Germantown Hospital, the first hospital on a community college campus (which also earned the College AACC Partnership Award), and supported the development of the Frank Islam Athenaeum Symposia, Southern Management Leadership Program and the development of the Biological Sciences Education building.

Prior to being appointed vice president and provost,  he served as Dean for Science, Engineering and Mathematics on the Rockville Campus, leading the second largest academic unit at the College through building renovations, the development of a new Science Center, growth in science programs, and signing MOUs with MCPS, Georgia Tech and George Washington University.  Previously, he rose from faculty to chair, Mathematics, at Jacksonville University.

Dr. Rai completed a PhD in mathematics from the University of Arkansas in Fayetteville, an MS in mathematics from Dalhousie University in Halifax, Canada, and an MS in mathematics and a BS in statistics, physics, and mathematics from the University of Allahabad in India. He is a graduate of Leadership Montgomery’s Class of 2009 and has served on the Board of Directors for Leadership Montgomery, the Gaithersburg Germantown Chamber of Commerce, the BlackRock Center for the Arts and chair of the Maryland Council of Community College Chief Academic Officers.  He currently serves on the Montgomery County Economic Development Council Executive Committee, Maryland Technology Council, and the Montgomery College and Holy Cross Health Steering Committee. He was appointed to the governor’s Life Sciences Advisory Board, and chairs the Workforce and Talent Subgroup. In 2017, he was selected Leadership Montgomery’s Outstanding Leader in acknowledgment of his exceptional leadership in making a difference in Montgomery County. He has received several awards for teaching and scholarship and has authored numerous scholarly articles and other academic publications. His publications are in applied mathematics (modeling HIV using differential equations) and mathematics education, and include Pathways to Real Analysis.

Please visit the Academic Affairs News webpage to read about my blog on Fulbright Study in Russia and other news.