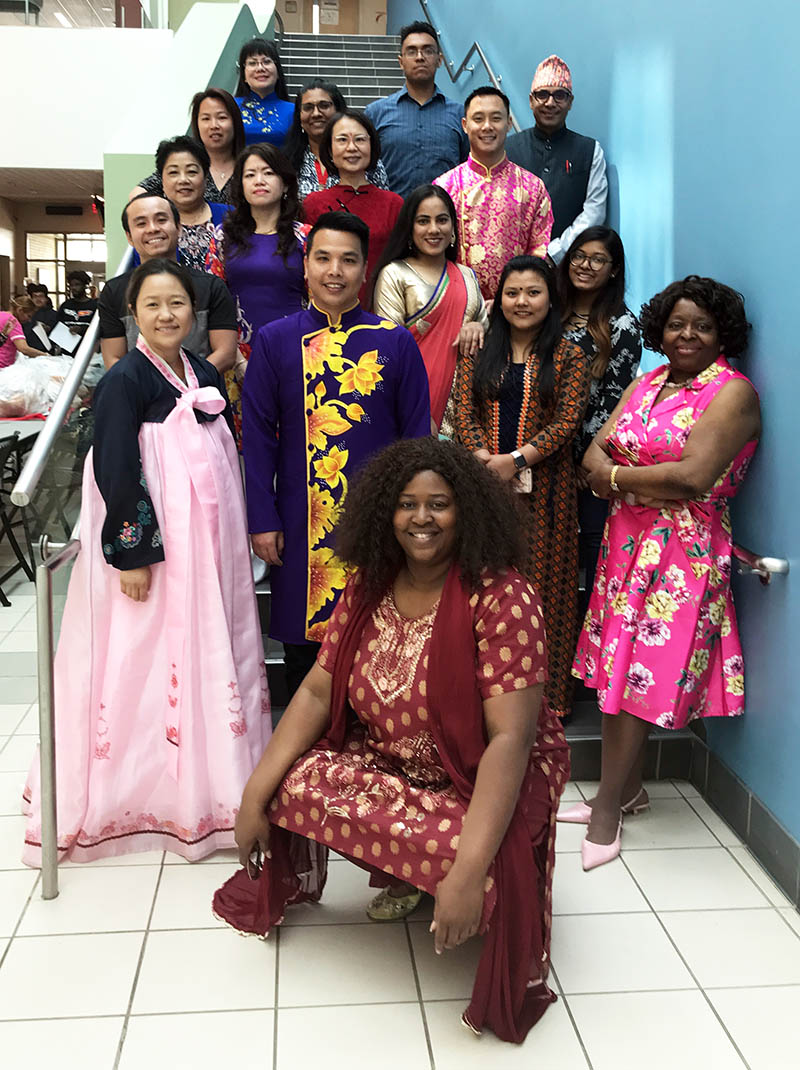 The MC Asian-Pacific Islander Heritage Committee is a college-wide committee comprised of faculty, staff and students whose purpose is to plan various activities at the college that bring awareness to the diversity and accomplishment of Asian-Pacific people. The committee also informs on issues and opportunities, outside of the college, that are important to the Asian-Pacific community.

Every year, the committee provides the college community with opportunities to participate in cultural programming, to share knowledge, and to learn more about contributions of Asian-Pacific people. Among our annual events is the Asian-Pacific Heritage Month Kick-off Festival held in April, which is also the capstone event.

Each year, we host our Asian-Pacific Heritage Month event at the Takoma Park/Silver Spring campus. The event includes exhibits, presentations, entertainment, and food samples for students, faculty, and staff.

Are you interested in being on the MCAH Committee? We are always looking for more ideas to make the Heritage Month Kick-off Festival a fun and learning experience for employees and students at the college. If you want to join the committee, please send an email to the Asian Heritage Planning Committee!

The Asian Pacific Heritage event depends heavily on our presenters. If you want to showcase your country, please send us an email and we will be happy to have a table for you during the day of the event. Presenters can do poster, video, PowerPoint presentation, and bring in cultural artifacts to display on the table. If you have questions regarding being a presenter, please feel free to contact us!

Take a Chance on Japan

While most film buffs are acquainted with the classics of Japanese cinema, it’s rare these days that new films from Japan are widely released in the United States.

Our fall film series New from Japan aims to remedy this by presenting nine new features and documentaries that provide a panorama of current filmmaking in Japan. You may not be familiar with the directors or stars, but they are all streaming for free, so why not take a chance?

You can read the full film descriptions here; of course, I think they are all worth seeing, but I thought I’d use this post to highlight two filmmakers whose work is less known to American audiences but is deserving of a closer look.

Nobuhiko Obayashi has had a long and varied career, but other than his cult horror movie House (1977), he is virtually unknown in the United States. A few years ago, I saw him speak at a film festival in Italy where he was being honored for his achievements. It happened to be Liberation Day, when Italians celebrate the end of the Nazi occupation of their country. That morning, Obayashi had spontaneously joined the parade and found himself walking next to a woman who, like him, was old enough to remember World War II. Although they couldn’t speak each other’s language, Obayashi said he could feel they both understood the bond they shared.

The Role of Food in Human Culture: A Summer Recipe from Vietnamese Culture

Many Asian cultures have a shared tradition of gathering the family to socialize or celebrate special events over big meals.

Many of us grow up eating the food of our cultures, enjoying family recipes passed down for generations. Food is a link to our heritage and cultural identity. Food affirms ethnic ties, bringing family and friends together. In stimulating our senses--smell, sight, taste, touch--food recalls life's most meaningful moments. Food and culture signify part of who we are, how we connect, what we value, and how we express ourselves as human beings.

View the Role of Food in Human Culture: A Summer Recipe from Vietnamese Culture Presentation (PDF,

Adopt the "Wai" as Your Greeting

We received a reminder from the Royal Thai Embassy that the wai may be among the safest ways to greet people in contemporary coronavirus society.

According to the Embassy, Thai culture views the slight bow and palms pressed together prayer-style as the safest, as well as the most charming alternative to handshakes or greetings involving physical contact. It appears that Prince Charles of the United Kingdom and President Emmanuel Macron of France use the wai. You may prefer the namaste, a similar, traditional Hindu greeting used in India and Nepal. Wai-style greetings are also used in Myanmar, Laos, and Cambodia. Likewise, the sembah is a greeting that one finds in Indonesia among the residents of Java. Malaysians and people in Brunei use the gesture as a sign of thanks. Whichever South Asian society to which you want to attribute it, pressed hands and a slight bow are safer than a handshake or a hug.

APIA Scholarsnew window, formerly the Asian & Pacific Islander American Scholarship Fund (APIA Scholars), is the nation's largest 501(c)3 non-profit organization that provides college scholarships to Asian and Pacific Islander Americans (APIA) with financial need. Our mission is to make a difference in the lives of APIA students by providing them with resources that increase their access to higher education which serves as the foundation for their future success and contributions to a stronger America.