As of June 2019, the planetarium is closed while we modernize the math and science facilities on the Takoma Park/Silver Spring Campus. A new planetarium will be included in the planned Catherine and Isiah Leggett Math and Science Buildingnew window. 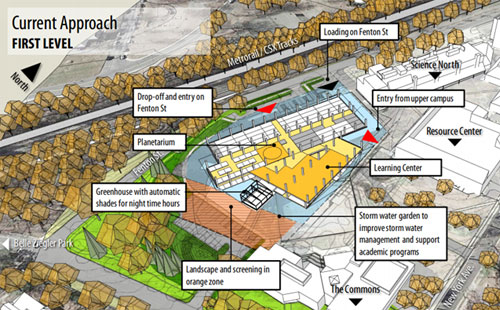 A new planetarium with a 30-foot dome will be included in the to-be-built Catherine and Isiah Leggett Math and Science Building.

The new planetarium/universarium will feature 100 movable seats under a tilted 30-foot dome, and it will show not only stars, nebulae, and galaxies but also Layered Earth software, Spitz videos, and 360-degree virtual reality video and sound—everything from space to polar bears in the Arctic to the Sistine Chapel.

The College anticipates construction of the new math and science building to start in December 2019. The facility is expected to be fully operational and open for classes in the fall semester of 2022.

In the interim, Astronomy 101 will be taught in CM216, with a huge 3D and 2D monitor displaying flat RenderBox, ATM-4, flat Layered Earth, flat Spitz video, and flat 360-degree virtual reality video with music and sound. Planetarium director and astronomy professor Dr. Harold Williams is also available for traveling talks at your school or group.

About the Former Planetarium

The Montgomery College Planetarium is located on the Takoma Park/Silver Spring Campus and is an extension of the Science South Building. The facility is both the centerpiece of the astronomy program and the local planetarium for the surrounding neighborhood.

The Planetarium has a 24-foot dome and uses a state-of-the-art Spitz SciDome XD projector that can show astronomical objects from the perspective of anywhere in the universe, show star positions up to 100,000 years in the past or future, and use Layered Earth to study our own planet's geology, geography, and atmosphere. The projector can also show full 360-degree video using the entire dome to create an unbelievably immersive experience. The facility has a large video monitor at eye level with 3D capabilities for special presentations and educational videos. The planetarium also produces its own 3D video and full-dome presentations.

The Planetarium has regular events, including lectures and light shows, and often hosts stargazing parties for dazzling astronomical occurrences like meteor showers, eclipses, and comets. Visitors can observe what are often once in a lifetime celestial spectacles through either of the Planetarium's two telescopes: a 13-inch Dobsonian and a 3 1/2-inch Questar. 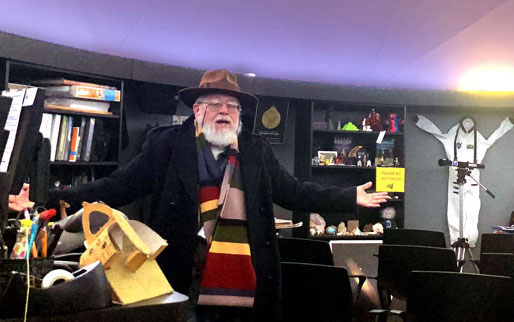 Dr. Harold Williams has been the director of the Montgomery College Planetarium since 1990. He is also the coordinator of the Physics labs and the head of the Astronomy program.

Originally from Jacksonville, Florida, Dr. Williams received his bachelor of science degree with a double major in physics and mathematics from Florida State University. He received his Master of Science from the State University of New York at Stony Brook and his doctorate from Louisiana State University—where he studied star formation by using 3D explicit Eulerian hydrodynamics. At LSU, Dr. Williams first started teaching astronomy and learning how to use telescopes and run a planetarium. Dr. Williams continued his star formation studies for two years after leaving LSU as a post-doctoral fellow at the Department of Terrestrial Magnetism of the Carnegie Institution of Washington.

In 1993, Dr. Williams co-wrote a proposal that secured funding from the National Science Foundation to allow Montgomery College's campuses to be connected to the internet. He has secured hundreds of thousands of dollars in grants during his tenure and works tirelessly to improve the Physics program and expand the Planetarium's offerings. Dr. Williams has developed numerous educational programs for the Planetarium, including grade-specific programs for local school field trips. He is also the faculty adviser to the Science Club.

Dr. Williams is currently president of the National Capital Astronomers, which is affiliated with the Washington Academy of Sciences. He was also president from 1996-1998 and 2005-2007, and vice president/program chairman from 1994-1996. He also worked with the Goddard Space Flight Center as a High Energy Spectroscopic Imager (HESSI) education partner.

When he is not running the Planetarium, Dr. Williams teaches astronomy and physics courses and represents Montgomery College at events and conferences abroad. His current scientific preoccupation is to one day fully understand how angular momentum is redistributed through star formation.

He has been interested in group theorynew window with symmetry in physicsnew window so he knows that "the character of a group is a function of its class." While he enjoys mathematics, he prefers to apply it to simple physical things like quantum general relativitynew window. He prefers LQG, loop quantum gravitynew window, to string theory, so you can see he is loopy, not stringy, and not tied up in knots of strings.

He did attempt to do quantum general relativity in the early 1980s at the State University of New York at Stony Brook. He was not successful, of course; no one else at that time was either. He knows how to fail bigly, not only with quantum general relativity in the early 1980s, but he spent two years in the second grade, so he must not be too smart. He tells children in the planetarium: “It is alright to fail, just do not stay failed.”  Grace really does work!

Dr. Williams is often very silly in the planetarium when appropriate.

From I-495, the capital beltway, go south on George Avenue (Route 97). Turn left on Sligo Avenue. Continue to Fenton Street; turn right. The parking garage will be on the right on King Street between two storage facilities. To reach the Planetarium, continue on Fenton and keep right through the next stop sign after the garage. The Planetarium will be on your left. The campus is easily accessible from the Silver Spring and Takoma Park Metro stations and local Ride-On buses as well.

Parking While Visiting the Planetarium

You cannot park in the lot directly adjacent to the Planetarium as this is for Faculty and Staff only and requires a permit. If you do not have a Montgomery College parking permit of any kind, there are multiple public metered parking spaces around campus. You can also obtain a visitor permit if you are attending an event that will allow you to park in the garage on King Street by first stopping at the Planetarium before parking. You may park briefly in the lot outside the Planetarium to go inside and obtain your permit.

Contact us for more information about the planetarium or to schedule an event.