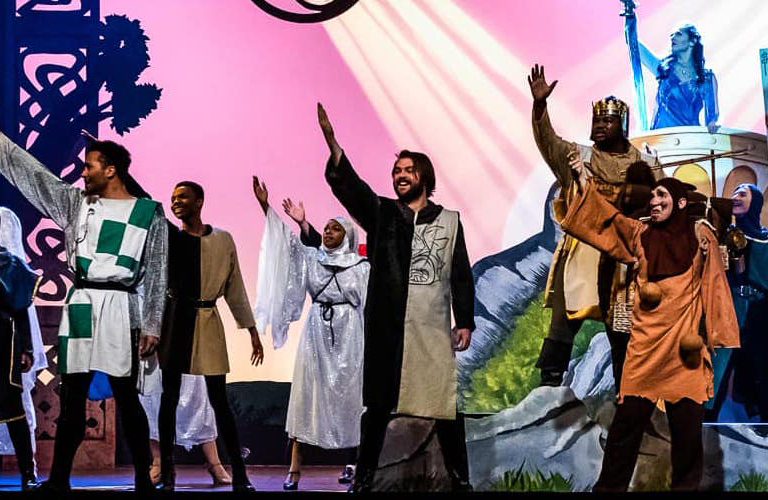 Check back in January for updates!

Performances are held on the MC's Rockville Campus in the Theatre Arts Building.

Give to the Summer Dinner Theatre Scholarship Fund

Your gift helps make it possible for promising students in our community to achieve invaluable experience in theatre production each summer. Support the longest running, one-of-a-kind dinner theatre program in our region with your tax-deductible donation.

We have been very fortunate that we have not had to turn away a student in need, thanks to the generosity of our patrons. Scholarships are available for both the college credit and non-credit courses.

When filling out the "Make a Gift" form on the Montgomery College Foundation's webpage, be sure to:

Education: MME (emphasis in vocal performance), BM in Musical Theatre. Post graduate: 3 seasons as an Artist in Residence with the Fletcher Opera Institute at North Carolina School of the Arts (formerly National Opera Company) Lisa is happy to be back at SDT, having directed summer productions from 2000-2004. She served as Director of Education at the Musical Theatre Center (now Adventure Theatre MTC) from 2009-2011, and also Director of Ensembles from 2001-present. National Tours: La Boheme (Musetta), L’Elisir D’Amore (Adina), The Merry Wives of Windsor (Anne), and L’Italiana in Algeri (Elvira). Ohio Light Opera: Margot in The Desert Song, Gretel in Christopher Columbus (American Premiere).

In concert, Lisa has enjoyed many performances with symphonies in the US and Canada, including four seasons with the Indianapolis Symphony’s “Yuletide Celebration” under the baton of Jack Everly (American Ballet Theatre maestro). Favorite musical theatre roles: Lyric Theatre: Young Sally in Follies, Zelda Zanders in Singin' In The Rain with Tony Award nominee Lara Teeter, and Mona in Dames at Sea directed by original Broadway cast member, Tamara Long. DC: Kennedy Center: created the role of The Narrator in the world premiere (cast recording) and national tours of The Nightingale, Reyalto in The Emperor’s New Clothes, and several readings of new works with Page To Stage Festivals. American Century Theatre: Nina in Dear World, Washington Savoyards: The Mikado (Yum Yum), The Merry Widow (Valencienne) Toby’s Dinner Theatre: The Sound of Music (Mother Abbess), and Trina in the critically acclaimed Falsetto’s at Ganymede Arts.

Lisa is an adjunct professor of voice at American University and Montgomery College, and her students can be heard on the Broadway stages, national tours, and are local Helen Hayes award winners and nominees. Though theatre is her profession, Lisa’s passion is animal welfare. In 2012 she founded DC Actors for Animals (endorsed by Bernadette Peters), a charitable organization that works with area professional theaters and artists to generate education, advocacy, and rescue for animals in need.

Dennis P. Mulligan, Production Coordinator
Dennis P. Mulligan (Production Coordinator) has been the Technical Director/ Production Coordinator for Summer Dinner Theatre since the 1999 season. Since his debut with Summer Dinner Theatre 40 years ago, he has worked in every area of theatre on over 200 productions, onstage and off, and is a full-time theatre technician at Montgomery College. His directing credits include Nickel and Dimed; Rosencrantz and Guildenstern are Dead; Living Out; The Skin of Our Teeth; Reckless; The Waiting Room; Hair; and this past season’s Working for the College Performing Arts Series. Dennis is a proud member of AFSCME Local 2380, the MC Staff Union where he was on the executive board for 16 years.