Critical Race Theory Is Not a Threat, but Demonizing It Sure Is, Says MC Scholar

Editor’s note: This story is part of our MC faculty and staff series in which professors and/or staff members discuss relevant topics within their areas of expertise. Dr. Katya Salmi is an assistant professor of Sociology at MC and author of a book chapter on Critical Race Theory. Her areas of research are human rights, race, gender, and equity.

Dr. Salmi recently led one of the sessions at the “Critical Race Theory: Reframing the Narrative” forum that Montgomery College’s Office of Equity and Inclusion hosted in partnership with the Montgomery County Executive and the Universities at Shady Grove. 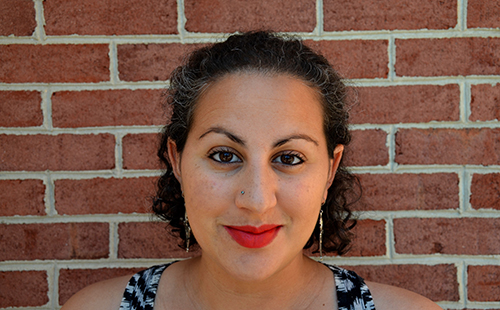 When I set out to do research on race in France for my doctoral dissertation more than 10 years ago, Critical Race Theory (CRT) was a theoretical framework that intuitively made sense to me. It provided an avenue to understand how race and racism can exist within a country that proclaims itself to be “raceless” as is the case in France where it is taboo, and even considered racist, to talk about race, let alone attempt to study it. How, then, do we make sense of the racism and racial discrimination that marginalized and racialized people experience in France in their daily lives?

Whether looking at France or the United States, Critical Race Theory is an approach that allows us to talk about race and systemic racism, even when the law ostensibly appears to protect equality for all. It is grounded in a legal tradition, first developed by scholars in the United States who sought to understand and analyze racism in the post-Civil Rights era. Legal segregation had ended – but social institutions, including the criminal justice system, continued to have a disparate impact on minoritized and racialized people.

Today, conservatives have launched attack after attack against Critical Race Theory and education on the history of race and racism in the United States, posing legal challenges across the country to restrict schools and colleges from discussing these topics. They were emboldened by former President Trump signing Executive Order 13950 in September 2020, banning federally-funded racial sensitivity trainings that consider topics including white privilege and Critical Race Theory–which he perceives as “divisive, anti-American propaganda.”

Ironically, those critiquing CRT and wanting to see it banned more often than not don’t even know what CRT is. Parts of the media and opponents of CRT repeatedly mischaracterize what it is and can rarely cite actual scholarship by those who played a foundational role in establishing this critical framework.

Put simply, it [CRT] is a theoretical framework that centers on race – not as a biological reality – but as a social construct. It investigates how race was and continues to be embedded in our societal fabric, dissecting norms, policies, and laws and their impact through the lens of the lived experiences of racialized persons.

For those interested in learning more about CRT, you can listen to this podcast with leading critical race thinkers. By engaging with the foundational works of legal scholars who started CRT, and those of academics and researchers from other disciplines and countries who apply CRT and have developed it further, we can see how it is not something evil to be feared.

Put simply, it is a theoretical framework that centers on race – not as a biological reality – but as a social construct. It investigates how race was and continues to be embedded in our societal fabric, dissecting norms, policies, and laws and their impact through the lens of the lived experiences of racialized persons.

Why is there such strong opposition to CRT? 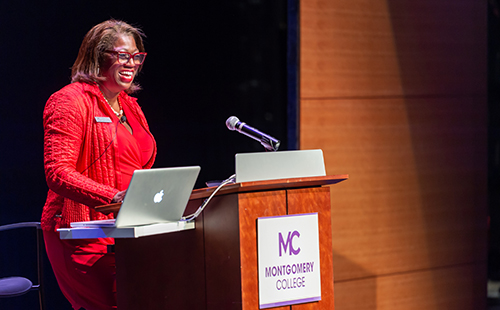 MC recently hosted the "Critical Race Theory: Reframing the Narrative” forum in partnership with the Montgomery County Executive and the Universities at Shady Grove. Sharon Wilder (above) leads the Office of Equity and Inclusion, which led the hybrid event.

Accusations vary from bias to “political correctness gone mad,” to even establishing tenuous links to communism and treason. Parents lobbying boards of education to ban CRT are afraid that their children are going to be blamed and feel bad if they learn about the history of racism and white supremacy. Critics label CRT and its proponents as un-American and a threat to the nation. Critical Race Theory and discussions around race, gender, and inequalities are presented as dangerous ideas creating rifts and division in American society. Racism is being turned on its head and now, the very tools that we use to understand systemic racial inequalities and white privilege are deemed racist.

But as many have pointed out, these debates and legislative battles are more harmful and worrisome in the power they have to distract and detract from the important conversations we should be having. We saw how the 2020 “reckoning” around race brought on by the protests in support of Black lives and against police brutality resulted in deeper and more frequent discussions around race, racism, and antiracism in numerous facets of our lives – from the need to reform police and the criminal justice system to identifying and remedying racial disparities in health outcomes, or again to increasing representation in media and amplifying a multitude of voices and experiences.

It would be a shame to lose out on this potential for creating a more just society because of a collective fear of confronting the realities of how race has shaped and continues to shape and harm our social institutions, our policies, and our laws.