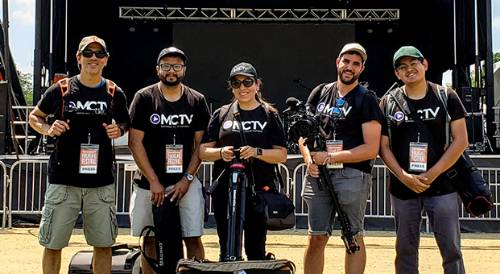 When Montgomery County residents tune in to Montgomery College Television (MCTV), they might not know that some of the programs they see are created by Montgomery College students. Students majoring in media production and student aides working alongside MCTV professionals create a weekly newscast and other pieces. The education, hands-on experience, and staff mentorship prepares students to either move directly into the television/video industry or transfer to a four-year institution.

Two recent MC graduates who learned television production, DJ Mirisola ’20 and Peter Pereyra ’21, were recognized with the 2021 Communicator Award of Distinction for documentaries they produced while at MCTV last year. Mirisola produced Job Search Techniques During Covid-19new window, and Pereyra completed Public Transportation and COVID-19new window. Both were part of a cohort of MCTV student aides, which ranges from four to eight students per semester. 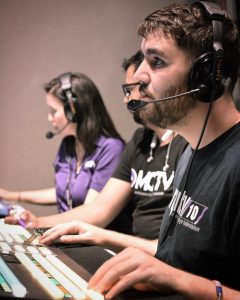 “I wanted to make something that was useful for students like me,” said Mirisola. “If one student saw it as a resource, that was my main goal.” Mirisola graduated during the first wave of the pandemic, and was trying to enter the workforce when economic activity was essentially halted. “There wasn’t a single day that I wasn’t doing [something for] my career.” He recently landed a job as production assistant with ABC-7 out of Arlington and with the NFL as a broadcast technician.

I’m convinced that having participated in MCTV’s internship program and the type of mentorship and hands-on training I received through it, has given me a leg up going forward to becoming a television professional.

Mirisola, a native Floridian, knew he wanted to come to MC when he visited the campus a few years ago and learned that as a student he would be part of a live show on local television every week. As a student, he helped with MC in Focus Friday newscast, a student-produced, housed and MCTV-broadcasted program led by Professor Joanne Carl and was mentored by the MCTV team. “They follow FCC standards. Everything is usable for a real show,” Mirisola said.

The collaboration allows students like Peter Pereyra the opportunity to work on their skills as videographers.

Pereyra, originally from Paraguay, said as an MCTV student, he experienced firsthand the same types of timelines and pressures commercial television stations go through when producing and airing their newscasts. “The collaboration between the TVRA program and MCTV is essential to making more well-rounded television professionals,” he said. “MCTV staff patiently explain, demonstrate, advise, and supervise how to make the most of the equipment available to put the newscast on the air.” 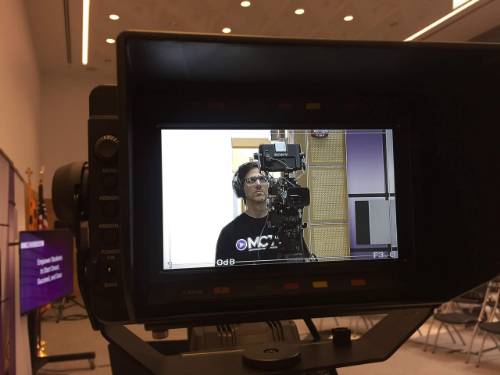 The collaboration allows students like Peter Pereyra the opportunity to work on their skills as videographers.

He studied acting, and then came to the United States 20 years ago to pursue that path in the DC area. When he grew interested in the craft behind the lens, he enrolled at MC to hone those skills in a more structured way. “I’m convinced that having participated in MCTV’s internship program and the type of mentorship and hands-on training I received through it, has given me a leg up going forward to becoming a television professional. I feel more prepared to face a job market that has again begun to hire following a hiatus due to the pandemic,” Pereyra said.

Collaboration That Benefits Everyone

In addition to the newscast, students also produce public service announcements, which air on MCTV. “Students then have a portfolio, and they can say that the content they created for class was broadcast on MCTV, which helps them stand out in the competitive job market,” Prof. Carl said. She believes the collaboration helps all broadcast students—not just the student aides–because everyone works as a team to create a good final product. 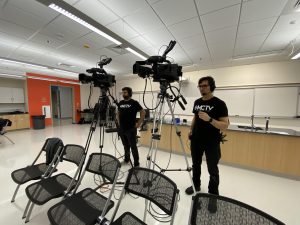 Peter Pereyra (right) gets ready to shoot a Town Hall Meeting alongside the MCTV crew.

Melissa Pace, MCTV’s managing director, said the internship program and the collaboration with TVRA students offer two-fold benefits. “They help our team complete all of our required and requested duties for presidential communications and events; and the hands-on experience they are getting outside the classroom really hones their skills and makes them employable and job-ready, or ready for transfer for a four-year institution.”

Pace says the students also do real service for the community because the programming presents guest lecturers and speakers from all around the world. “The fact that we can capture this programming and put it on our cable channel, on our website, and on YouTube… makes that content accessible to millions of people,” said Pace.

Reflecting on the value of mentorship and support from MCTV producers and other staff, Pereyra said, “One of the most remarkable things about the mentorship program was that the professional producers I worked with would not hesitate to pass their knowledge on to me and the other interns. They seemed just as keen as the faculty on seeing us succeed. My biggest and only regret is not having learned about the MCTV program before I did, I would have definitely applied sooner.”