Soccer Empowered This Afghan Woman, Now She’s Making a Life in the US with the Help of MC

When Hajar Abulfazl was 4 years old, the Taliban took control of Afghanistan for the first time. In her 27 years, she has been an immigrant (more than once), become cocaptain of the Afghanistan women’s national football (soccer) team, studied at medical school in Kabul, and advocated for women, girls, and human rights. Abulfazl currently lives in the D.C. area and is working towards a public health science degree at Montgomery College. 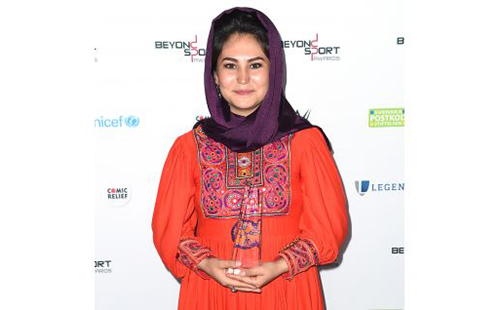 Hajar has vast experience from grassroots to elite levels of sports participation and unique knowledge about the benefits sports have to improving health, academic, economic, and social conditions.

As a child, Abulfazl moved with her family to Pakistan and then Iran, where the educational system was better. When she was in fourth grade, the Afghan government was created, and her family returned to Kabul. In eighth grade, she discovered soccer and joined her school’s women’s team, and it marked a turning point in her life: “Before playing soccer, my life didn't have a goal, and I was nothing in this world."

People in Afghanistan generally did not think girls were equal to or as valuable as boys, she recalls: “I was searching to find a way to prove to them—the broader community—that there is no difference between son and daughter. I started playing soccer for about a year, but I didn't disclose this secret just in case my parents disapproved.”

Eventually, she found the courage to tell her parents about her secret activity because she needed a soccer uniform and proper shoes to play—she had been playing in her school uniform. To her surprise, her father responded: “This is great! Let’s go shopping!”

She worked hard every day, she said, and after a year and a half, she had a chance to compete to be in the national team.

Abulfazl not only made the Afghani national women’s soccer team, she was eventually named a cocaptain. Playing for nearly 10 years, from 2009 to 2017, she felt compelled to encourage girls to play soccer and become role models.

“Football built everything in my life: self-esteem, self-confidence, my body, my mind,” she says.

Cultural norms still kept many Afghan families from agreeing to let their daughters play soccer, so Abulfazl and her peers increased their outreach efforts in Kabul and the surrounding provinces. They knocked on doors and talked to families. They talked to the media and to the community often to increase awareness and encourage participation.

Football built everything in my life: self-esteem, self-confidence, my body, my mind.

“We would have long conversations and sometimes argue with their families or with their communities about giving their daughters freedom of choice.”

While playing on the national team and going to medical school, Abulfazl was appointed as head of the women’s committee in Afghanistan’s federation, the department that worked on outreach to girls and women to increase the number of players. In Afghanistan, unlike the United States, students can pursue medical school directly after finishing high school. After graduating in 2017, she took a job in Washington, D.C., with a nonprofit group that worked with a project in Afghanistan. She worked on improving her English mostly by watching movies and shows, until a friend mentioned Montgomery College one day.

“I am so thankful because it has helped me a lot,” she said. Abulfazl started with ESL (English as a Second Language) classes in 2019 and recently finished ELAP (English Language for Academic Purposes) courses, which have allowed her to start taking credit classes. She wants to pursue the public health science degree and eventually transfer. 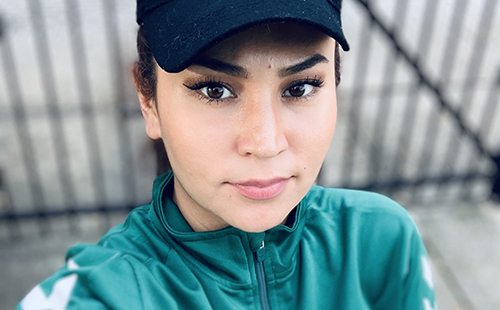 She played for nearly 10 years and felt compelled to encourage girls to play soccer and become role models.

Abulfazl credits the MC faculty and staff who helped her, including those at the Writing, Reading, and Language Centers. One ELAP professor in particular, Stephanie Landon, she says gave her incredible confidence and support. Landon says Abulfazl inspired other students by her tenacity and positive attitude.

“Her efforts to make the world a better place shine through in all she does, and I have been so fortunate to have played one small role in her path towards achieving her goals.”

Abulfazl is not yet eligible for financial aid, but has been able to get some scholarship funds from the MC Foundation. She works full time and can only take one class per semester. With Afghan refugees coming to the United States now in large numbers, she reflects on what MC and the broader community can do to support them.

"When you come here, you have to leave behind everything you have: your reputation, your experience, your knowledge, all things that you put years of effort into building and shaping your identity,” she recalls. “But when you do come here, often you are losing what you built, and you feel like nothing. It is then you have to begin everything from ground zero. That’s a harsh reality."

Reaching out to new Afghan families and individuals and telling them about the availability of English classes and the pathway they can take to start College, is key. But it’s not the only thing.

“It’s not always about moving to the US to live the ‘American dream,’” says Abulfazl. “It’s about being safe and having the right to exist with basic human rights. … I want them to achieve their own dreams in life while becoming another bridge to help and support the many others who desperately want that opportunity.”