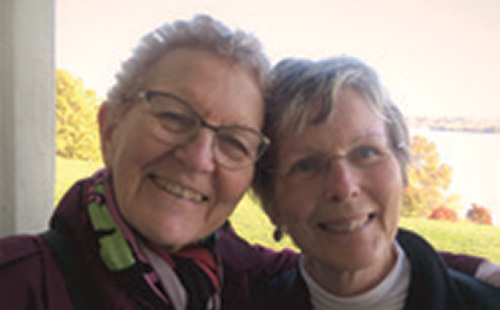 Gathered with Cameroonian friends for dinner in 2019, Irene Eckstrand and Betty Guthrie listened to accounts of incredible hardship and loss. Each one of their guests had fled Cameroon’s civil war, bearing few personal items and the scars of injustice inflicted by French-Cameroonian government-led forces.

Their friend, Samuel Tumaban, for example, fled the country after being imprisoned and tortured. “I can’t go back home,” he said. “Armed groups—military government troops and separatists—are both dangerous. There are land mines everywhere. People are dying every day .... When I was released from prison, I was followed. A friend tells me they are still looking for me—my picture is still up in the police station five years later.” Before the evening was over, Betty and Irene asked their guests what they could do to help. “They all said, ‘we want an education and we want to give back,’” recalls Irene. Betty adds, “I am endlessly humbled and inspired by their resilience and courage, and their determination to make the most of their new lives here.”

Betty and Irene’s connection  to Cameroon stems from their childhood in Africa. When they were girls, the sisters lived at a mission station in Cameroon. For six years, they called Bafia, a town in the country’s western French-speaking region, home. Bill and Eula Guthrie, their parents, were medical professionals and Presbyterian missionaries. During two separate assignments, Bill, a doctor, and Eula, a nurse, treated patients at a hospital there in the late 1940s and early 1950s. Irene, born in Africa, was six when the family moved back to the U.S. in 1955. Betty was 13.

More than 60 years later, the Guthrie sisters are following in their parents’ footsteps by helping Cameroonians in need here in the United States. Betty, a professor emeritus at the University of California-Irvine and living on  the West Coast, serves as a court advocate for Cameroonians seeking asylum. Irene, in Maryland, has coordinated with her sister on behalf of Cameroonians in Montgomery County who need immigration advice.

In 2020, the sisters combined forces to establish the Bill and Eula Guthrie Endowed Scholarship to support Cameroonian students at MC. “After the dinner event, we realized starting a scholarship was a great idea,” says Irene.  “The war in Cameroon continues  to be horrible,” she says, “but we can step up to do something here. For them, even the minimal tuition at MC is too much.... This way, they have a chance of making their lives here way better.”

Betty and Irene’s initial gift of  $50,000 grew to $85,000 within months as family members and friends from coast to coast contributed. Irene’s Unitarian Universalist Congregation of Rockville and Betty’s Quaker community in California also raised money and contributed. This fall,  the first students begin receiving support from the Bill and Eula Guthrie Endowed Scholarship.