The most wonderful time of year kicked off last month with Diwali, Thanksgiving, and Hanukkah; as we dive into Christmas, Kwanzaa and New Year’s celebrations, Montgomery College students and employees share some of their special traditions. The MC team wishes you all a happy and healthy holiday season! 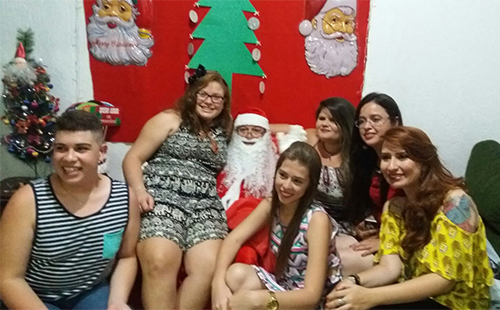 MC student Danielle Costa grew up in Brazil and her family would open presents on Christmas Eve at midnight.

“I grew up in Brazil, in a small city in the interior of São Paulo called Taubaté. Our family was always very humble yet fairly large. For the holidays, especially Christmas, my family came up with a tradition so all the family members could receive a special gift. Opposite to America, in Brazil, we share gifts on Christmas Eve after midnight dinner, rather than on Christmas morning. As far as I remember, we had a Santa Claus appearance and Secret Santa tradition. Every year, someone from the family is picked to dress up as Santa and show up after Christmas dinner. The ‘Santa’ gives the kids presents (the ones their parents bought according to each kid’s request), and as kids, we had no doubts in our minds that Santa was really there for us. After that, we had a secret Santa for the adults. We would have previously exchanged names on a piece of paper, so every Christmas Eve, every family member would have received a gift. As a child and as an adult, I can say that this simple tradition showed how much my family loved each other. These memories are something I’ll cherish forever, and I hope to continue them with my children.”

“Each of my kids light their own menorah each night. They each have a special menorah that they either made in preschool or we bought when visiting Israel. 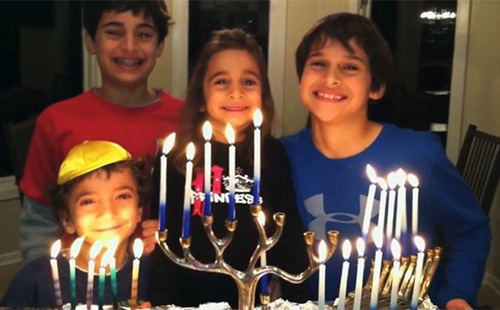 Each of Kandel’s kids light their own menorah each night to celebrate Hanukkah.

Here is an excerpt from an online article explaining Hanukkah: ‘Although it does often fall around the same time of year, Hanukkah is not just the Jewish equivalent of Christmas. This yearly celebration (Hanukkah took place from November 28 to December 6 in 2021) is actually a commemoration of a religiously significant event—namely, a successful revolt led by the Maccabees (i.e., the heroes of Hanukkah) against their Syrian-Greek oppressors, and the subsequent rededication of the Second Temple in Jerusalem. The story goes that in the aftermath of the revolt, the desecrated temple had only enough oil for one ritual nightly lighting of the menorah. However, by a miracle from God, that small amount of oil was able to last for eight full days, giving the Jewish worshippers enough time to procure more. Today, Hanukkah (also known as the Festival of Lights) is a happy occasion when families and friends gather together to celebrate the triumph of light over darkness by lighting candles for eight nights and enjoying some of the festive Hanukkah traditions described below.

"I love how food is more than sustenance; it is also a vessel for cultural traditions (even as they adapt and evolve), family, love, and community."

The most important of all the Hanukkah traditions is the lighting of the menorah, a nine-branched candelabra that represents the lamp (and the miracle) from the Hanukkah story told in the Talmud, a book of Jewish religious teachings. For the eight nights of Hanukkah, families come together and light a new candle of the menorah, from left to right, while saying a blessing. After a candle is lit, families often place the menorah in a window where it will fill the room with light, whilst being visible to passersby. Fun fact: Although there are only eight nights of Hanukkah, there are nine branches on a menorah because the one at the center is intended to hold the shamash, a candle used to light the others. Also, if you’re wondering where oil factors into all this, we can explain that, too. While oil was once used in the wells of the menorah, the ritual changed with the times and eventually candles took the place of oil.” 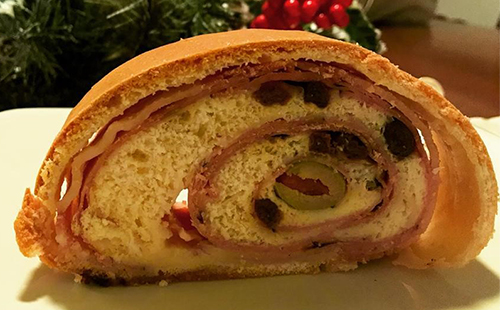 Zambrano and her family make the traditional Venezuelan pan de jamón, a bread stuffed with ham, raisins and green olives that she grew up eating.

“I grew up in Caracas, Venezuela, eating pan de jamón (ham bread), a traditional Christmas bread filled with ham, raisins and green olives. It is said to have originated in the early 20th century, and nowadays it is a staple of the holiday season in any Venezuelan party, along with pernil (roasted pork shoulder), hallaca (a Venezuelan version of the tamal) and ensaladilla rusa (Olivier-style salad.) To keep the tradition alive, my husband Ricky, also from Venezuela, makes it every year, and the house fills up with the aromas from our childhood while the bread bakes. For New Year’s Eve, we follow the Spanish tradition that consists of eating 12 grapes, one with each clock bell strike at midnight of December 31 to welcome the New Year and make wishes for each one.

I love how food is more than sustenance; it is also a vessel for cultural traditions (even as they adapt and evolve), family, love, and community.”