Commencement 2022 Lauds Graduates Who Went Beyond the Limits 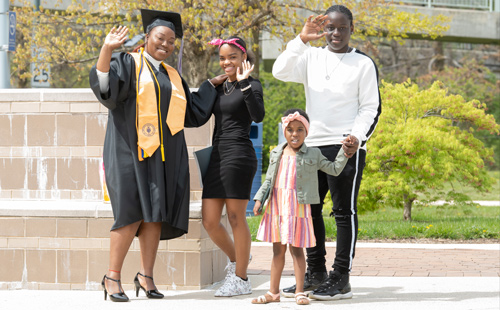 Shereika Chin ’22 (pictured with her sister, brother, and her daughter, center-right) is first in her family to graduate from college. Originally from Jamaica, Chin was able to complete an associate’s degree and transfer to the University of Maryland’s criminal justice program at the Universities at Shady Grove with support from the MC Foundation. Her goal is to attend law school and become a criminal prosecutor.

President Jermaine F. Williams officiated his first—and Montgomery College’s 75th—commencement exercises May 19 and 20 at the Rockville Campus. Two days of 80-plus-degree heat did not deter nearly 1,200 of the 3,200 graduates and their families and friends from attending the ceremonies.

“I believe this is what higher education is supposed to do: to show you what lies beyond your limits.”

Dr. Williams’ poignant remarks resonated with so many members of the College’s Class of 2022, but one graduate in particular epitomizes transcendence.

Shereika Chin is a 30-year-old single mother of a four-year-old daughter with autism. Born in Jamaica, she came to the United States after high school, and enrolled at Berkeley College in New York. She earned a 4.0 grade point average, but could not afford to continue. She went back to Jamaica. When she returned to the U.S. in 2014, she aspired to complete her education.

Dr. Williams: “[Higher education prepares you] to journey beyond what you believed were the limits of your potential.…

Chin began at MC in 2015. As an undocumented immigrant, she could only afford one semester. She dropped out, got married, and had a child. After three years in an abusive relationship, she left her husband, who burned all her possessions. “When I was left with— literally—the clothes on my back, I went down on my knees and asked God to help me,” she said. Chin re-enrolled at the College in 2021.

“You have given more of yourselves in these extraordinary times than was asked of you in earlier years.”

“A lot of us are parents—providers,” said Chin, who does not receive child support from her ex-husband. “The quicker we can get it [a college education] done, the better.” Chin enrolled in six classes in fall 2021 and four more in spring 2022 to complete her degree in criminal justice. At the same time, she juggled full-time jobs at Amazon and then Home Depot, always working around her daughter’s inconsistent sleep schedule. She took advantage of seven-week classes. “Although it’s double the work, I liked the challenge,” she said. She was grateful to her professors who recorded their classes.

“You went beyond the limits of pride to ask for help when you needed it.”

During the pandemic, Chin reached out to the Montgomery College Foundation for COVID relief funding for mounting bills. “That funding stopped me from being homeless,” she said. “It paid rent for two months, put food on the table, and saved us from being out in the freezing cold.”

“Where you could have turned away or tuned out, you looked straightforward and leaned in.”

Though she believed the odds were stacked against her during the pandemic, she received unwavering support from professors. “Every single professor became my personal cheerleader,” said Chin. “Each one of them played a role in me ‘crossing the line.’ You can see the humanity in each and every one of them.”

“You continued helping others to go beyond their limits, which is a sure sign of those who have truly transcended their own.”

While facing a seemingly insurmountable challenge to educate herself, Chin attended to the needs of her daughter, Zaraiah-Monae. “I knew something was wrong when she was about a year old,” she said. She worked with Montgomery County’s Infants and Toddlers Program, which provides early intervention services to help families address their children’s developmental and special needs. “She was nonverbal when she started last year. Now she can ask me, ‘Are you okay?’” Chin said, adding that her daughter’s progress even astonished staff members.

“Most of you also have an internal story: about rising above self-doubt or developing self-discipline. Each of you has a story of transcendence. And you will carry that into your next chapter, along with the valuable credential you will earn today.”

“I’m still battling the self-doubt,” said Chin. “I’m this Jamaican girl from a third-world country. No one in my family has ever gone to college.” With a 3.8 grade point average, Chin will transfer to University of Maryland’s criminal justice program at Universities at Shady Grove. “I want to be a lawyer, a criminal prosecutor,” she said. “I’m carrying an entire generation on my back,” she said. “I’ve got a whole community that is depending on me to walk across that stage—and keep going.”