“Scholarship support is changing my life.” 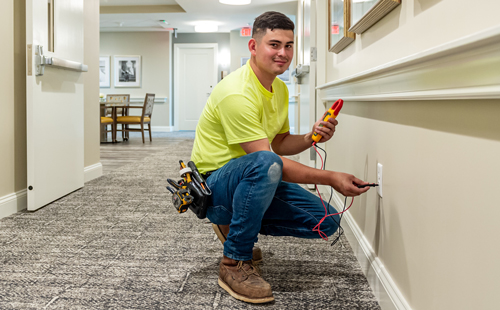 José Hernández, 23, immigrated to Maryland from El Salvador at age 14. He attended Montgomery County Public Schools (MCPS) and learned English while navigating high school. Unable to afford tuition at four-year schools, he worked for a cleaning company, then he enrolled at Montgomery College. Currently, he works as an apprentice electrician and attends classes at MC. With scholarship assistance, he is pursuing a degree in electrical wiring. His goal is to become a licensed master electrician.

“I like electrical work,” Hernández says, “because it’s complicated. You have to know wiring and safety, how to read blueprints, and estimate costs. ... Each job is different. There is a lot of technology to it. I like that I need to think about how to make it all work.”

As a kid, Hernández broke open his own toys to see how the electronics worked. Once, he took apart an RC car he had just received for Christmas. “I played with it for two days, then opened it up with a screwdriver and took out the engine,” he says. A few years later, he could not resist opening his cell phone; his mother wasn’t happy when he was unable to get it back in working condition.

“I need to keep up with my electrical studies,” Hernández says. He works full time and helps his brother (also an electrician) on side jobs after work and on weekends. “I still have a lot to learn,” he says. “I want to keep going at MC. I love studying and I want to learn carpentry, so I can do more than one job. I also am
interested in engineering.”