The Science of Giving 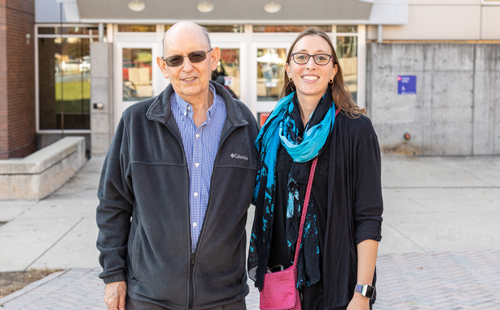 Vince Berg and his daughter, Megan, along with Megan’s twin, Leighann Berg (not pictured), established a scholarship for STEM students last year. Megan and Leighann are MC graduates and third-generation science/engineering professionals.

Vince Berg’s father, Milton, was the first person in his family to earn a college degree. The son of immigrants from Eastern Europe grew up in New York, then moved to Washington, D.C., after graduating college in 1939. “My father became a top marine engineer—thanks to a college scholarship,” he says. “Without it, he probably would have worked in a store or the post office, like many of his generation.”

The scholarship that changed Milton Berg’s life created a lasting impact for his descendants. Vince attended University of Maryland (UMD), earned bachelor’s and master’s degrees, and built a 40-year civil engineering career in Montgomery County. His twin daughters, Megan and Leighann, are third-generation college graduates working in environmental/civil engineering and the bioscience industry. Both graduated from Montgomery College.

Last November, the Bergs established a scholarship for Montgomery College science, technology, engineering, and mathematics (STEM) students. Their vision for the Berg Family Scholarship for STEM Students is to remove barriers for students seeking technical education, including those who are new to the country and/or first in the family to attend college.

The Bergs’ gift to the Foundation comes at a time when nearly 30% of all degree-seeking students at MC are majoring in STEM programs: science, engineering, computer science and technology, cybersecurity, and general studies with a STEM concentration (as of fall 2021)*. Many will seek transfer scholarships and other support to continue on at four-year institutions.

“It doesn’t matter where you come from,” Vince says, “when you get here [America], your greatest potential is reached by going to school—and then going further in school.”

Megan ’05, ’06 and Leighann ’05 both enrolled at Montgomery College because they were undecided about their majors. After graduating from MC (Megan earned two degrees), they transferred to four-year schools and went on to earn master’s degrees. They now have affiliations with four higher education institutions in Maryland: MC, UMD, UMBC, and Johns Hopkins University, but Megan says Montgomery College is the one that set them up for success.

“My sister and I had a great experience at MC,” Megan says. “By trying out different courses and keeping costs down, we were able to figure out where our interests would take us. Our professors were invested in helping us learn. And other students were collaborative, not competitive—I didn’t always have that at other schools.”

In addition, Megan says she received a scholarship that helped her avoid student loan debt. “All of that gave me a huge leg up in life ... I’m in the position I am today because I went to MC.”

“It doesn’t matter where you come from,” Vince says, “when you get here [America], your greatest potential is reached by going to school—and then going further in school.”

After establishing the named scholarship, Vince plans to make annual contributions to the fund using the required minimum distribution (RMD) from an IRA, something he suggests to others who are retired and not dependent on RMD income: “This is a great way to reduce taxable income while supporting a good cause.”

In terms of investment, students with associate’s and bachelor’s degrees tap into a stream of higher future earnings (PDF,

) that continue to grow throughout their working lives. Their improved skills benefit themselves, their employers, their families, and their communities. “That is why America is great,” Vince says. “You can start off really small and go big. It just takes a little help.”