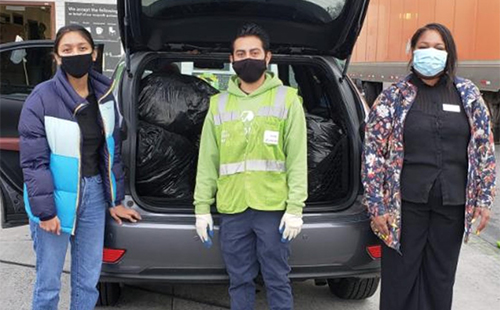 The CAN Club, based on the Rockville Campus, hosted the drive from November 2021 through February of this year for the second year in a row. The club seeks to raise awareness about environmental issues and improve the environmental quality of people’s lives by completing “green” community service and educating the public about sustainable habits.

With this in mind, Teresa Doley, MC student and club president, researched projects that would align with the CAN Club mission. Club members unanimously agreed the Blue Jeans Go Green program offered sustainable ways to deal with waste that would appeal to the MC community. According to national statistics, approximately 450 million pairs of jeans are purchased each year in the US.

“I wanted to incorporate a way for students to actually make an impact on the environment so they are not just coming to meetings to talk about things,” Doley said.

In her research, Doley discovered Blue Jeans Go Green helps collect and recycle old denim for new use in different manufactured products, such as building insulation. Approximately 500 pairs of jeans will insulate one home; 1,333 pairs will divert one ton of waste from a landfill.

“I wanted to incorporate a way for students to actually make an impact on the environment so they are not just coming to meetings to talk about things."

The Climate Action Now Club launched its first Denim Drive in on National America Recycles Day. Doley led the initiative to partner with local thrift stores to gather and repurpose the unsold jeans. It now has working relationships with Planet Aid, Urban Thrift, Prime Thrift Laurel, and various Uniques and Value Villages, which have all contributed large numbers of denim garments to the club’s recycling drives.

Despite having the first drive virtually (during the COVID-19 pandemic), the club collected nearly 1,000 jeans, which exceeded its goal to collect 500 in its first year (2021). Based on the community response this year, the club has set another ambitious goal for its 2022 denim drive. Doley says next year, they hope to collect 5,000 pieces of denim.

The club is currently holding a book drive that will deliver donated books to Turning Page, a nonprofit in Washington, D.C. The drive will run until the end of this spring semester. To donate, contact teadoley@gmail.com or mcclimateactionnow@gmail.com. “We collected about 2,000 books for them last year, and we are hoping to get 5,000 this year,” Doley said. 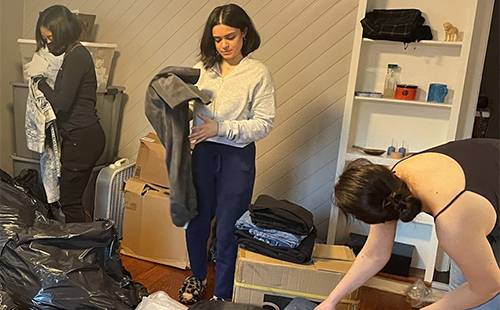 “By completing this green community service project,” Doley said, “we’re one step closer to a better environment for all.” She thinks of it as a lifestyle: “You are actively looking for ways to reduce the amount of waste you’re producing. It’s not only just about recycling; it’s about reusing or repurposing.”

Doley, who has led the club for the past two years, is graduating from Montgomery College this spring.

“It’s great to be able to recycle these products,” said Noa Nissim Kobliner, a Montgomery College freshman who helped pick up bags of donated jeans from the various thrift stores. “I am proud to have been able to make a difference and avoid having these jeans be thrown into landfills. I look forward to next year's drive.”