The World Ensemble is a diverse collective of instrumentalists and vocalists that combine their individual experiences and personalities reflecting the diversity of Montgomery College to create a myriad of musical styles from around the globe.

This one-credit course (MUSC 161D) is open to all MC students. All instruments, voices, and skill levels are welcome, and there is no audition required. Partial scholarships are available.

Our current focus is on the musics of the Caribbean, including reggae, calypso, zouk, biguine, and steel pan, while incorporating instruments and techniques from a multitude of cultures. 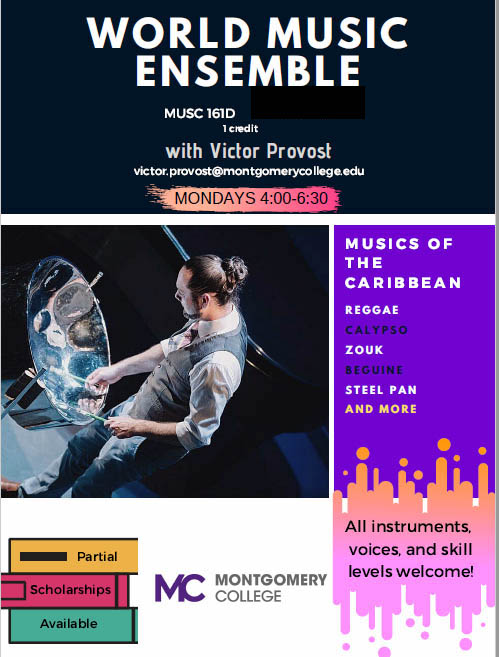 In the musical spirit of group participation and community and especially concerned with the world and its music, the group dedicated past concerts to help support the UN Water For Life Project. We studied and performed music and dance from around the world on the theme of water as part of our Water Music for Life Project and were able to raise money for the UN’s Unicef Water Fund. We are now US Fund for Unicef Ambassador.

The MC World Ensemble Students have also collected Toys and Winter Clothing for a Native American Reservation Drive in which a truck-load of items were driven out to South Dakota reserves over winter break. We also raised money through the Farafina Kan Music Scholarship Concert for both the MC Music Student Scholarship Fund and the Alessie African Music and Dance Scholarship in memory of Diallo Kouyate.

As indigenous arts are an integral and beneficial part of community, they have become equally important to the MC World Ensemble, and its mission as a community college. As a result, the students are encouraged to play for civic and community events and to participate in benefit performances, sharing their culture and privilege with that of the greater community. 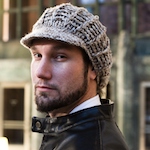 Victor Provost is widely regarded as one of the world’s leading voices on the unique, and often misunderstood, steel pan (or steel drum). Through appearances at concert halls, clubs, and stages throughout the world, he has been meticulously developing a reputation as a “dazzling” soloist, crafting an impressive improvisational voice and style. With a strong foundation in Bebop, a contemporary sensibility, and deep roots in Caribbean music, he seamlessly melds and mixes genres. The Washington D.C. City Paper’s “Jazz Percussionist of the Year” six years running, his new recording Bright Eyes debuted at #5 on the iTunes Top 40 Jazz Charts and has been met with praise from The Washington Post, Downbeat Magazine, and Hot House Magazine, as well as artists and presenters.

In addition to leading his own group, Victor tours with NEA Jazz Master, Paquito D’Rivera, is a member of the GRAMMY award-winning Afro Bop Alliance, and works with several of the Mid-Atlantic region’s most lauded musical collectives.  Already in his relatively young career, he has performed and recorded with Jazz luminaries such as Wynton Marsalis, Hugh Masakela, Joe Locke, Nicholas Payton, Terell Stafford, Dave Samuels, Steve Nelson, Ron Blake, and Wycliffe Gordon, among others.

Victor is an Adjunct Professor of Music at George Mason University (Fairfax, VA) and Montgomery College (Rockville, MD) and conducts residencies and master classes throughout the United States and the Caribbean at schools such as Berklee College of Music in Boston, University of Akron, Miami University, NYU, TTU, and Northern Illinois University. He is also an Arts Ambassador to his hometown of the U.S. Virgin Islands, which honored him with a Special Congressional Recognition in 2014, and to which he returns frequently to perform and teach as part of Dion Parson’s community-based arts initiative, the United Jazz Foundation.

Jaime Pajaro, accordion player, Latin Percussion and Vallenato leader says, “I like the World Ensemble because I enjoy sharing all new things I’ve learned about music.”

Carla Alas, vocalist and percussionist, says, “I love the World Ensemble because it is a great cultural experience.”

Diana Downey, violinist, vocalist and percussionist, says, “I enjoy the experience I’ve had in the World Ensemble mostly because it has helped me grow as a musician and realize the possibilities in the world of music.”

Jay Katzenberger, electric bass, vocalist and percussionist thinks “The World Music Ensemble is Great!!! The variety of culture, music and great people makes every year at MC extra special. It is a wonderful addition to my life.”

Jermaine Swaby, composer, vocalist, guitarist and percussionist thinks that “The sound of any music is a mutual language which is emphasized in the World Music Ensemble.”

Melanie Pinkert, vocalist, percussionist, Korean instruments, says “We are all at different levels with different experiences, but we come together to create something absolutely fantastic.”

Ade Bolugun, vocalist, photographer and website designer says, “This ensemble brings the spirit out of everyone as they join in what it takes to be alive and well in music, spirit and sound!”

Bobak Manesh, digital photographer: “The music was awesome and I felt great that I could participate by capturing it in pictures.”