Over the last several years, there has been increased attention around sexual violence and sexual misconduct on college campuses. As a result, The Maryland Higher Education Commission, through the passage of new legislation, Maryland House Bill 571 (PDF,

) , requires that all higher education institutions in Maryland conduct a campus climate survey to evaluate the environment on campus. Montgomery College is committed to fostering a safe and inclusive environment for students, faculty and staff, and guests. To this end, on February 17 through March 9, 2020, students are invited to participate in the SpeakUpMC Climate Survey on Sexual Violence and Sexual Misconduct. The survey results will allow us to better understand the campus climate related to sexual violence and sexual misconduct. Understanding our challenges, as well as the positive behaviors of our students, will allow us to focus on future educational and/or programming initiatives, as well as reviewing policies, intervention, and response protocols.

What else can I do to let my voice be heard?

Places to Get Help

Montgomery College is committed to providing a supportive learning environment and fostering safe, healthy relationships among our students. Here’s a sad, troubling fact that you may know: Sexual assault and sexual violence are serious issues on college campuses almost everywhere. As such, you should also know this important fact. MC will not tolerate sexual assault and violence offenses. The College will take comprehensive measures to keep you safe.

All students are encouraged to complete the training "Sexual Assault Prevention for Community Colleges". This engaging program, which includes a confidential survey and brief tests to personalize your learning experience, offers the following important information:

Your responses will be confidential. The College will only receive information about the student body as a whole and will never see any individual student's answers.
Montgomery College is very committed to offering learning opportunities to all members of our community, especially students, to improve health and welfare. We hope you enjoy the course!
Christopher Moy
240-567-5412 | EMAIL 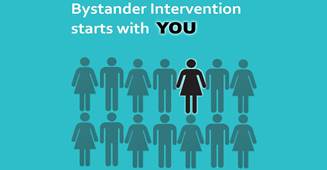 Everyone can be a bystander to a situation. However, it takes more to be an active bystander. Sometimes we see something, usually bad, and wonder if we should have acted. We are all bystanders to various events, even online events. As bystanders, it is up to us to take a stand and intervene when appropriate.

Being an active bystander makes a difference. It is a choice to become an active or prosocial bystander. Bystander intervention is the act of assisting another in an emergency or non-emergency situation. It could be as simple as talking to someone who is distressed or helping someone who is being abused.

There are instances when some bystanders believe they should not get involved. They may not choose to get involved for a host of reasons such as:

What would you do in a given situation? Appropriate bystander intervention is the most beneficial course of action. Sometimes, this is easier said than done. Bringing in the Bystander (BITB) intervention training can arm you with the skills necessary to assess situations for the most appropriate response. Do something to change your campus, neighborhood, workplace, etc. Choose to be an active bystander. Request the BITB training today!

The BITB Training Request form can be completed by faculty who want to bring the training to their class. Clubs, student organizations and groups can also request the BITB training. ANYONE can request training! This creates a powerful, safer community. Empowered bystanders make the campus community safer by standing up and speaking out when they witness situations that could potentially harm the health and safety of others.

Please review the following carefully before submitting a request for the BITB training workshop. In order to provide the most effective bystander intervention training possible, consider these things before requesting: 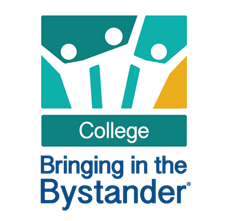 Please carefully review the training considerations above then complete the BITB Request for Training formnew window. You will receive a response within 2-business days.

Here's what MC Students have to say

Perception of Safety & College Responsiveness:
Students’ expectations that the College will respond in a positive way to reports of sexual assault is very high, hovering at about 80% for a range of questions that reflect faith in MC’s good intentions. Similarly, 60-67% of students agreed or strongly agreed that they feel safe on campus, with neutral response ratings hovering between 24-30%. Students asked whether Montgomery College has created an environment where sexual harassment, stalking and sexual violence are recognized as problems indicated “yes” at 68.31%; 79.91% said that these issues are safe to discuss at Montgomery College.

Dating Violence:
155 students reported that they had experienced dating violence and 75 indicated “I’d rather not answer;” six reported that the event had occurred on a Montgomery College campus.

Rape:
94 students told us that they had experienced rape and 123 indicated that they would “rather not answer;” NO students said that rape had occurred on a Montgomery College campus.

Secondary Impact:
573 students told us that someone close to them had experienced sexual violence, and 161 indicated that they would “rather not answer.” Impacts on these students’ well-being were similar to those of students who reported experiencing sexual violence victimization.

Comments by students:
341 students commented on the survey. Comments discuss students’ experiences of sexual violence and document the pain and suffering of victims: “I feel really depressed about the situation;” and, “I was so young and scared, I didn’t know what to do;” and, “I was going through a violence relationship [that] made me want to drop my classes.” One student wrote about “being assaulted in a classroom full of people” and, when the professor “[did] nothing,” “feeling out of place, scared, disgusted.”

Some comments reveal the dominance of destructive attitudes in some students’ understanding of sexual violence: “some students expose themselves by the way they dress;” and, “people who are abused are the ones who asked for it;” and, “ban women from wearing yoga pants.” One student wrote that “if I saw a girl getting sexually harassed, I probably wouldn’t do anything… I would probably watch if it’s entertaining.”

Overall, students expressed a strong desire to receive more education, to have more opportunities to be involved in violence prevention.

In 2016, in accordance with MHEC requirements, Montgomery College conducted its first Climate Survey on sexual violence, which had two main goals:  to measure prevalence of sexual assault and to measure how much students knew about Montgomery College’s sexual misconduct policies and reporting procedures. The 2016 Survey Results indicated that MC students experience sexual assault at rates generally equivalent to the national average. The majority of assaults reported did not occur on campus. While students felt strongly that Montgomery College would handle sexual misconduct seriously and appropriately, over half of the students reported that they did not know about the resources available.

Montgomery College spent the last two years building a Culture of Respect and the 2018 Climate Survey was designed to:

In February 2018, 1188 students participated online in the SpeakUpMC Climate Survey on Sexual Violence. The following information is a summary of the findings from that survey:

Perception of the Campus Climate
Students’ expectations that the College will respond in a positive way to reports of sexual assault is very high, with 83% of students agreeing or strongly agreeing that they feel safe on campus, which is 15 percentage points higher than 2016 responses.

In the past two years, Montgomery College has increased awareness of resources available to students who experience sexual misconduct. As the table below demonstrates, students have received written information about a variety of resources on campus, which increases the likelihood that they can locate resources when needed. In fact, 52.2% of students surveyed indicate that they would “know where to go to make a report of sexual misconduct,” an increase of 5.8 percentage points from 2016.

In addition, students indicate that if they were to experience an incident of sexual misconduct, they are very likely to seek assistance from internal offices such as the Title IX Office (19.6%), Counseling and Advising (34.5%), Public Safety and Security (48.6), Student Life (18.5%), Student Affairs (17.0%), Athletics (8.2%) and an MC Faculty Member (21.7%). This highlights the importance of clarifying the role of faculty and staff as “Responsible Employees” who are required to notify the Title IX Coordinator of reports and who are strategic allies in making connections with campus and community resources.

Experiences of Sexual Assault and Violence
In the 2018 survey, 9.5% of students surveyed reported that since coming to the college, they have experienced unwanted sexual violence or contact. The most common forms reported include sexual harassment, defined as unwelcome sexual advances, requests for sexual favors, or other unwanted behavior of a sexual or gender-based nature; stalking, defined as engaging in a pattern of behavior such as following someone or leaving repeated unwanted messages, texts, emails, etc. that would cause a reasonable person to fear for their safety or to suffer substantial emotional distress; and nonconsensual sexual activity. While a majority of respondents reported the incident, they are less likely to tell someone at Montgomery College about this, which means that they are less likely to learn about the resources available to them to mitigate the impacts of such trauma on their educational success.

As was shown in the 2016 survey and again in the 2018 survey, those students who experience sexual violence reported they feel depressed (64%), have difficulty focusing on schoolwork (58%), arrive late to class (31%), miss an assignment (28%), miss one or more class (25%), or fail a class (19%). This data highlights the negative academic outcomes that often result from experiencing sexual misconduct. Further, this supports the critical role of the Title IX Program in ensuring access to educational accommodations designed to mitigate the effects of experiencing gender based violence.  It also reinforces the urgency in reporting to the Title IX Coordinator.

Perceptions of Bystander Behavior and a Culture of Respect
Some misconceptions about sexual misconduct still exist and in some cases, have gained support within the college community. For instance, in 2018, 42.9% of students surveyed agree, strongly agree that, or do not know if sexual assault happens because “men get carried away.”  Similarly, 32.9% agree, strongly agree, or do not know if rape and sexual assault happens because people put themselves in bad situations. While more efforts should be focused on combating these rape myths, there are other areas where institutional efforts such as consent workshops have helped to produce desired effects. In 2018, 20.3% of surveyed students strongly disagree, disagree, or do not know if, “consent to engage in sexual activity can be withdrawn at any time,” a decrease of 10 percentage points from 2016.

Since 2016, Montgomery College has increased programming about Bystander Intervention and baseline data indicate that students are willing to intervene in situations when necessary. For instance, 76.9% of students indicate that they are likely or very likely to call campus security if they saw a group bothering someone in a parking lot or similar setting. 87.5% of students agreed or strongly agreed that they would confront a friend who was hooking up with someone who was passed out. In addition, 93.8% of students surveyed indicated that they would go with a friend to the police department if the friend said she or he was raped. These results are encouraging, suggesting that institutional efforts to promote prosocial bystander behavior resonate with the student population and may likely be used in situations to de-escalate problematic behavior.

Suggestions for Future Research
In looking ahead to 2020, MC will continue to educate students and the community about ways to foster a Culture of Respect. MC has introduced a Title IX module via the online new student orientation, while also updating its online sexual assault prevention training from Haven to Sexual Assault Prevention for Community Colleges. The new module addresses the unique characteristics of a 2-year commuter institution attended by a large number of nontraditional students. All faculty are encouraged to have their students participate; the training is available from the Title IX homepage. Additionally, MC will continue to offer bystander intervention training; contact the Title IX office to request a training.