Testimony of a Holocaust Survivor from Croatia 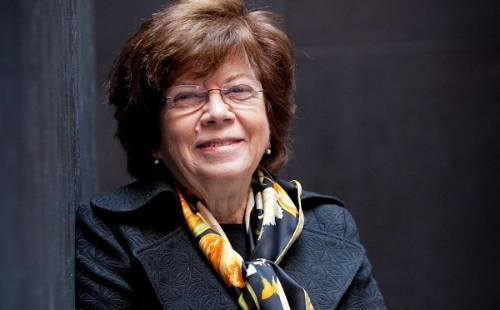 Holocaust survivor Dora Klayman will talk about her life in Croatia during World War II. She will discuss the particulars of the persecution of Jews by the Ustasa, the Croatian allies of Nazi Germany, which cost the lives of thousands, including many of her close family members. Dora will also recount the challenges she experienced after the war, and her path to become an educator.

Theodora Klayman was born Teodora Rahela Basch in Zagreb, Yugoslavia, on January 31, 1938. Her father, Salamon, owned and operated a small brush manufacturing plant. Her mother, Silva, a teacher, grew up in Ludbreg, a small town in northwest Croatia, where her father, Josef Leopold Deutsch, served as the community rabbi for more than 40 years.

In April 1941, while Theodora—whom the family called “Dorica”—was visiting her grandparents and extended family in Ludbreg, Nazi Germany invaded Yugoslavia. Croatia came under the control of the fascist Ustaša regime, which collaborated with the Nazis. By June, Teodora’s parents and infant brother, Zdravko, were arrested. Their housekeeper was able to get Zdravko released from jail and his mother’s family then took him to Ludbreg. Teodora and Zdravko’s father was deported to the Jasenovac concentration camp and their mother to Stara Gradiska, a subcamp of Jasenovac.

The recipient of degrees from the University of Maryland in French and in teaching English as a second language, Theodora taught in the Maryland public school system for 30 years. She has two children and has volunteered at the United States Holocaust Memorial Museum since 1999.

About Bella Mischkinsky and the Annual Memorial Lecture Series

Bella, a Holocaust survivor, was born in September1922 in Lodz, Poland.  She came to the United States in 1946, moving later to Montgomery County, Maryland.  She retired to Clearwater, Florida to live near her sister Irene Glassberg, and other dear family members.

Bella was active as a volunteer with the United States Holocaust Museum and with the Montgomery College Alumni Association. Over the years, she developed deep ties to, and lasting friendships with the College, our faculty and staff.  Bella was also one of our students.  She and her husband Hank (Henry) Bermanis enrolled in Dr. Myrna Goldenberg’s course, Literature of the Holocaust.  She told Dr. Goldenberg that she was taking to class to be sure that the class accurately portrayed the Holocaust.  Reassured by her experiences in class, she committed to a legacy of Holocaust scholarship at MC.  This series is supported by a generous gift from Bella’s estate.

Each year the Bella Mischkinsky Memorial Lecture brings a scholar, journalist, or advocate to the College - to deepen our understanding about the history of the Holocaust—and to help students make relevant connections across time, across disciplines and to their own lives and actions.