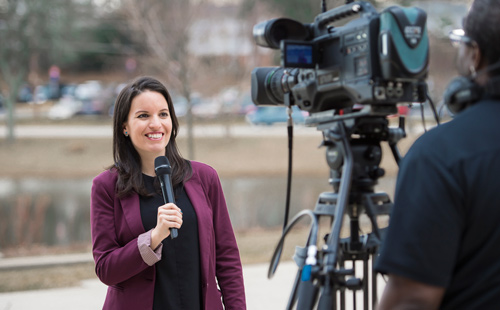 From TV and radio producers, to digital media specialists and broadcast journalists, Montgomery College is training the next generation of media production professionals.

MC’s broadcast media degrees and certificates will prepare you for a new career, a career change, or you can upgrade your current skills.

Faculty mentorship from leaders in the field will set you on the path to success. Our full-time faculty started teaching at MC after years of experience in the broadcasting industry. Our part-time instructors are working professionals in the field.

There are several degree and certificate options offered in broadcast media production. Please note, the radio and TV programs are only offered on the Rockville campus.

Our television production complex features a 30' x 40' studio and video control room, equipped with a Ross Vision I switcher, Deko 1000 character generator, digital audio board, teleprompter workstation, and source monitors, and is designed for classroom seating.

Some advanced TV production classes utilize the all-digital MCTV studio, and many student productions are broadcast on MCTV. You can also volunteer for large scale MCTV productions.

The advanced studios feature all the equipment of the basic studios plus the Scott Studios SS32 digital storage and playback system; used for the eRadio WMCR on-air control room and the eRadio WMCR Production studio. Sound effects and production music libraries are also available for advanced radio students.

Four digital workstation racks with computers allow students to work outside of the studios to do dubbing, mixing, and monitoring from one format to another and to do basic digital recording onto Adobe Audition.

The DC metropolitan area is a major center for television news and public affairs production. CNN, C-Span, Univision, and BET have bureaus, or are headquartered here, and each network has a local affiliate station. These are among a wide variety of businesses and government agencies that use MC students as interns, and frequently hire MC students after graduation.

Washington, DC, is the 8th largest radio market in the nation. Current and former MC radio students work on-the-air and behind-the-scenes at many DC area radio stations. The curriculum will prepare you for employment in the broadcasting, cable, video production, and digital media industries.

MC offers a wide variety of noncredit classes. These courses are designed to help you upgrade your skills, pursue career training, or learn something new.