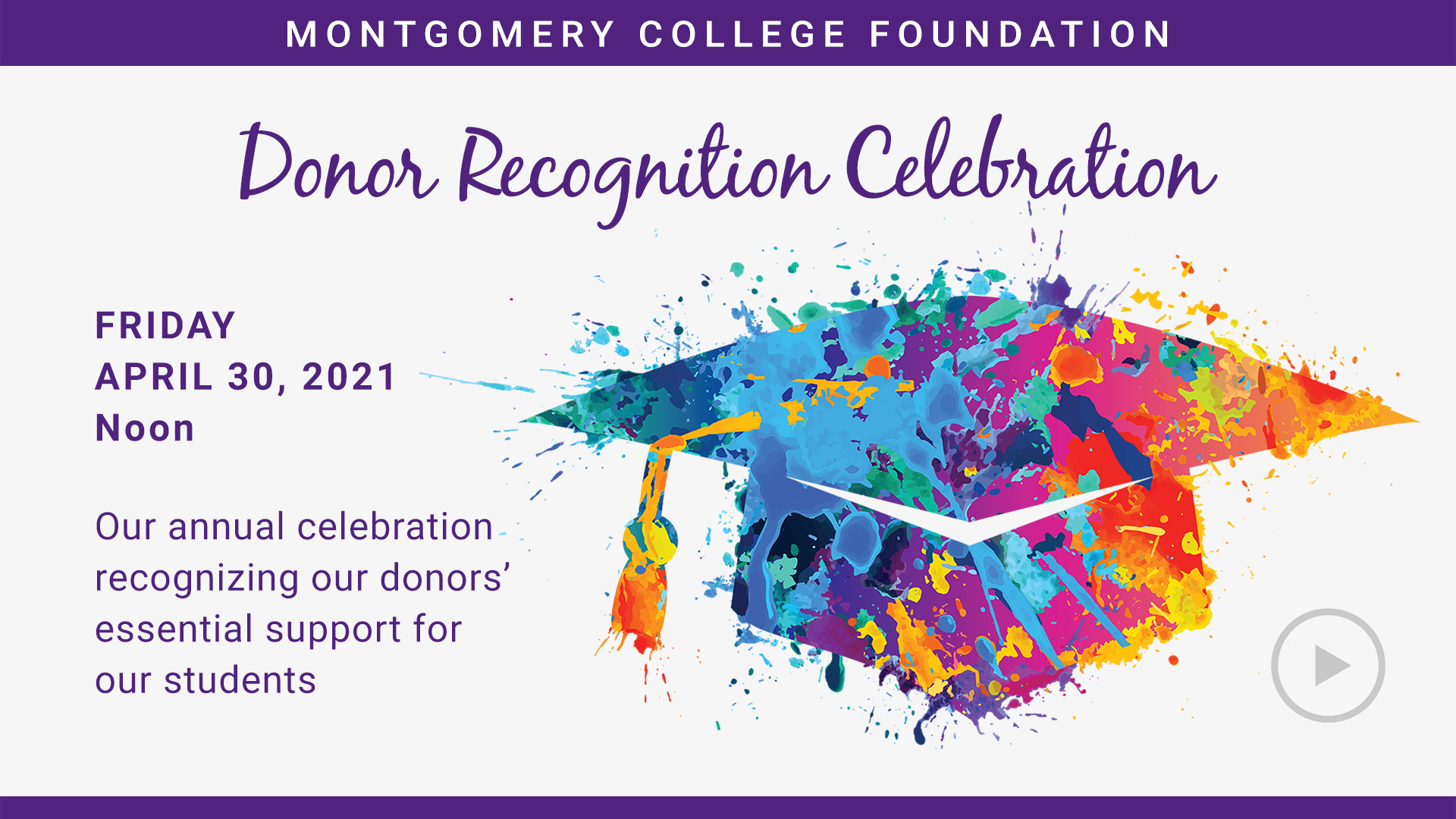 The Montgomery College Foundation Board of Directors cordially invites you to view our virtual presentationnew window. Board Chair Kenneth H. Becker will host the presentation, which will feature guest speakers, student remarks, and recognition of our donors' essential support for our students. 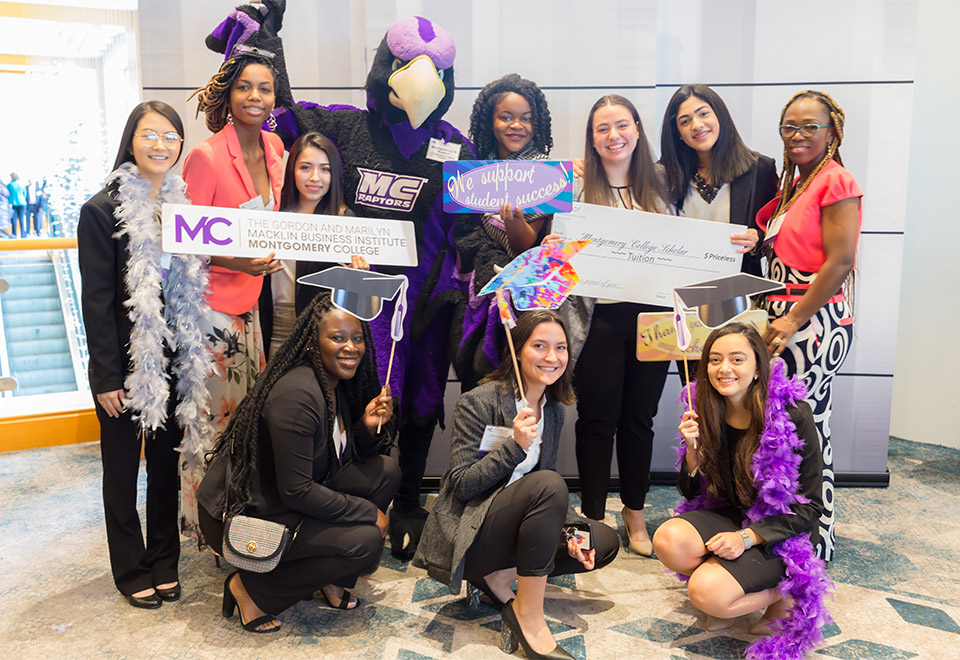 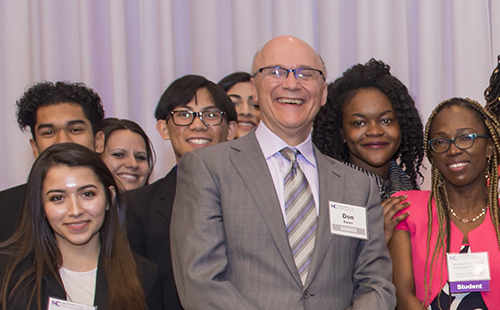 Over 500 donors, students, faculty and staff gathered on April 5 for the annual Scholarship Recognition Luncheon celebrating philanthropy and the access it provides to immeasurable educational opportunities.

“The more Gordon found out about Montgomery College, the more he loved it. He also loved business, so, logically, he proposed a marriage of business and Montgomery College – the Macklin Business Institute (MBI).

Each MBI student will take enough credits in honors courses to graduate with an honors designation, and they must maintain a minimum GPA of 3.5 to remain in the program. While that is a very high bar, the students continue to excel. This year’s class has a median GPA of 4.0.

Approximately two-thirds of MBI graduates continue onto the Smith School of Business at the University of Maryland. Other prestigious universities MBI graduates attend include Cornell, Columbia, Georgetown, NYU, and Virginia. Some are doing graduate work at Harvard, Columbia, Duke, and UNC.” 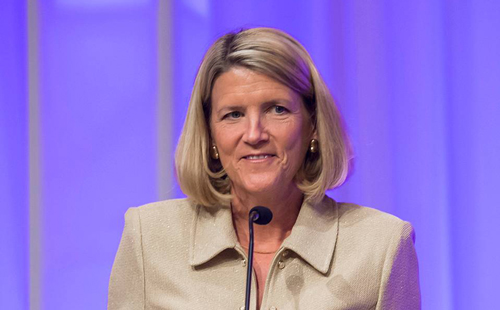 Mary Pat Alcus devotes her time, energy, talent, and resources to ensure students in our community are able to pursue their education at Montgomery College. Through her work on our board of directors and by generously establishing the Mary Pat and Darren Alcus ACES Pathway Champions Scholarship, she is committed to ensuring that all students – regardless of their income – have access to an affordable, high-quality education that will allow them to fulfill their true potential.  Read more below!

What better way is there to honor the remarkable ACES program than by bringing together donors and students? This year’s Scholarship Recognition Luncheon, hosted by the Montgomery College Foundation’s Board of Directors, was a resounding success, allowing scholarship donors and their scholarship recipients the opportunity to spend time together and learn more about each other.

This year’s keynote speaker, Ms. Mary Pat Alcus, brought the heart of ACES to light. She spoke about a lunch she had with Jorge Torres, the student who receives the scholarship she established with her husband, Darren. Ms. Alcus provided the almost 500 guests in attendance with a glimpse into Jorge’s life, which consists of successfully juggling a very demanding load pursuing a degree in biological sciences while working three different part-time jobs... Read the full story in the Summer 2018 Foundation Focus.

The Montgomery College Foundation Board of Directors welcomed almost 500 people to the 2017 Scholarship
Recognition Luncheon, which took place on March 30. This event was poignant for both our donors and our students, as the students were able to thank, in person, the generous donors who contributed so significantly to their education. 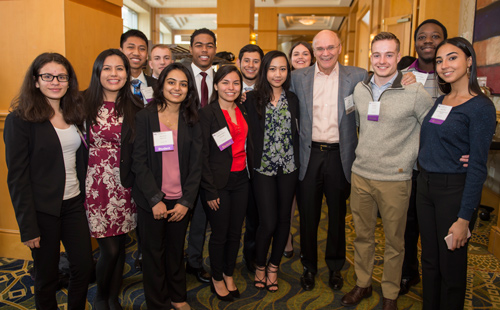 The keynote speaker, Crystal Carr Townsend, president of the Healthcare Initiative Foundation (HIF), discussed HIF’s pledge of more than $1 million to the Montgomery College Foundation and the Universities at Shady Grove, culminating in the scholarship recipients receiving their bachelor’s degree in a healthcare related

field. Ms. Townsend noted that her story is not unlike those of many who were in the room, and then recounted the personal struggles she had to overcome, and the recognition, at an early age, that it was only through education that she and her family would be pulled out of poverty. She pointed out that it was because of the scholarships she received that she was able to pursue her college education. HIF scholarship recipient
Dina Haddad spoke eloquently about her dream to become an internal medicine physician in Montgomery County. She offered her heartfelt thanks on behalf of the more than 2,000 students who received scholarships from the foundation this year.

The audience was riveted as Ms. Townsend and Ms. Haddad described the impact of the scholarship program. It was a wonderful opportunity for donors and students to shake hands or offer hugs of thanks and appreciation. Many entered the room as strangers, but left as friends. 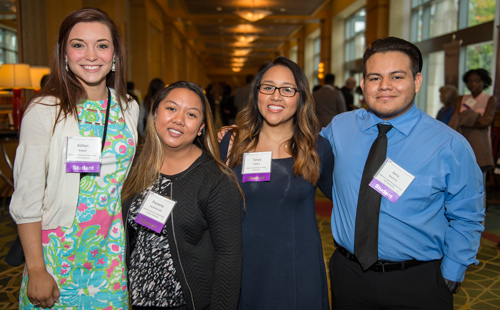 The theme for the 2016 Scholarship Recognition Luncheon—Philanthropy, Opportunity, and Excellence—was evident in all aspects of the luncheon, which took place on April 28 at the Bethesda North Marriott Hotel & Conference Center.  Courtney Clark Pastrick, president of the Clark Charitable Foundation, was the donor speaker at this year’s luncheon. Her remarks about her father’s influence on her life and his recognition that education is the key to uplifting our society were well received by the 425 guests in attendance.

Many of the donors and students in the room were surprised to learn that Mr. Clark was once a scholarship recipient, which allowed him to attend the University of Maryland and earn a degree in engineering. The students were inspired by Courtney’s message to be the hardest working student in the classroom as well as the hardest worker on the job. Hard work was the trait that Mr. Clark credited for his own success.

This year’s scholarship recipient speaker, Princess Rockefeller, was one of the first recipients of the A. James Clark Engineering Scholarship, established through a $500,000 grant from the Clark Charitable Foundation.  Princess, who is pursuing a degree in chemical engineering, talked about growing up without many of the things we often take for granted and how those hardships instilled in her a love of chemistry and, in turn, engineering.
She also described the opportunities she has had, including the opportunity to study engineering at Montgomery College, which offers 11 different engineering specialties and is the largest engineering transfer program in the country.

A highlight of this year’s luncheon was the Board of Directors Challenge. The fundraising challenge was initiated by the foundation’s board of directors vice chair, Ken Becker, who called upon his fellow board members to raise 2016 Scholarship Luncheon Brings Together Donors and Students funds specifically at the luncheon. The board members who participated in the challenge raised $50,000 toward the match. In total, the challenge raised more
than $130,000 during the luncheon. Applause erupted when, in her concluding remarks, Courtney Clark Pastrick committed $25,000 to the Board of Directors Challenge on behalf of the Clark Charitable Foundation.

The Montgomery College Foundation also appreciates the continued generosity of the Gaithersburg- Germantown Chamber of Commerce. During the luncheon, the local chamber’s president, Dr. Marilyn Balcombe, presented a $30,000 check to the foundation. She reminded the students about the importance of keeping their talent in Montgomery County. Through the years, the chamber has provided almost a quarter of a million dollars in scholarships to MC students.

With a record number of guests in attendance, this year’s luncheon was a true celebration of the opportunities that philanthropy provides and the true and lasting difference it makes in the lives of students in our community. 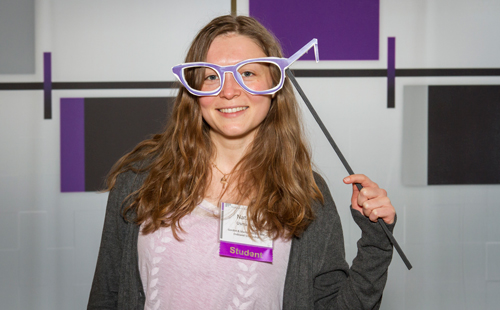 When Alejandro Vargas and his mother left their home country of El Salvador just three years ago, he arrived in the United States with only basic knowledge of English but boundless ambition about the prospect of a bright future.

This year’s event emphasized the Achieving Collegiate Excellence and Success (ACES) program, to which Vargas attributes his educational success.

When he came to the United States, Vargas began attending Seneca Valley High School, where he worked hard to quickly transition out of the ESOL program and eventually begin the IB program. Soon after, however, he found the academic weight to be too much for him, and his grades and motivation declined.

“With a very low GPA in my junior year and the beginning of my senior year, hopes of a college education were very low,” Vargas said. “But then, out of nowhere, hope came unexpectedly. The ACES program arrived my senior year. Not only as a bridge program to college, not only as another way of counseling, but as a creator of hope, dreams, and peace within me and my family. Dr. Damien Robinson, who is here today, took my hand and introduced me to this program, and to many other opportunities that have now changed my life completely.”

“I experienced a miracle,” Vargas said, “a miracle that came in form of The Growing Academic Potential ACES Scholarship. It was an opportunity that, as a man of faith, I believe was laid for me to be able to succeed. Everything took a 180 degrees change in my life. Within this blessing other blessings came, such as the Jack Kent Cooke Foundation Scholarship and the Karla Berg Walker Scholarship. These scholarships have helped me move forward in my life, and grow as a person.”

Montgomery College President DeRionne Pollard noted the importance of such philanthropic efforts, given the county’s growing needs. She said requests for scholarships have skyrocketed and financial aid applications are up 61 percent.

“At the College, the average family income of our students who receive federal funding is $27,000 per year. In the same county where you and I live—where gas prices, utility costs, and the price for food are the same for everyone—families are being raised on just $27,000 per year. It is the cost—not the lack of interest and certainly not the ability to thrive—that is the barrier to a college degree for many of our county residents,” she said.

“That’s why programs like ACES and the named scholarships that many of you established are so crucial.”