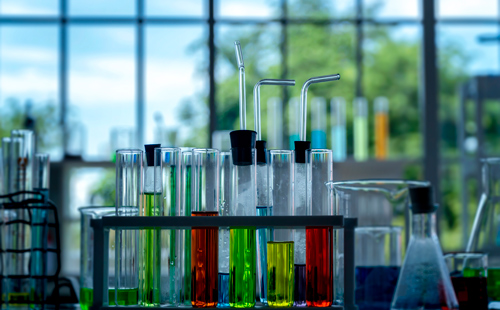 The chemistry and biochemistry program is designed to provide the first two years of courses necessary to obtain a chemistry or biochemistry baccalaureate degree from a four-year college or university. In addition to general and organic chemistry knowledge, students will be trained in data collection and analysis, and scientific communication.

Through the laboratory portion of the program, students will reinforce their understanding and application of the theory learned in class, develop laboratory skills and techniques, and formulate conclusions based on observations.

The College's fully equipped labs and facilities, including the Bioscience Education Center at Germantown, the Science Center at  Rockville, and the Science North and Science South buildings at Takoma Park/Silver Spring, ensure you have the resources to be successful. Each campus has a dedicated Math and Science Center where you will find additional resources, including free tutoring by qualified individuals.

Upon completion of this program a student will be able to:

Meet with your academic advisor regularly to discuss your academic plans and make sure you are on track to graduate and/or transfer. The program advising guide outlines the degree requirements and is meant to supplement the advising process.

Check specific requirements for Chemistry or Biochemistry majors using  ARTSYS if you plan to transfer to a Maryland school, or refer to the major requirements websites of other schools for exact information on course requirements.

Transferring to University of Maryland College Park in Chemistry or Biochemistry

UMCP has made significant changes in the Science curricula, noted below.  Also see the UMCP Limited Enrollment Program page for Majors in: Biological Sciences, Biochemistry, Chemistry and Environmental Science and Policy-Biodiversity and Conservation.

MC students who have completed MC's Principles of Chem I & II  and Organic Chem I & II [CHEM 131, 132, 203, and 204] will have to take CHEM 272 Bioanalytical Chem Lab [2 cr.] (but not CHEM 271) at UMCP to complete the chemistry requirement for a Life Science major at UMCP. Students who wish to take CHEM272 at UMCP may do so through the  MTAP program, where students may take one course at UMCP while enrolled at MC.

For some positions listed, a bachelor's degree or higher may be required. Use the Career and Program Explorer to see a full report for this career field. See links below chart for further guidance and/or connect with a Program Advisor to discuss career goals.

A suggested course sequence for Chemistry and Biochemistry majors follows.

The chemistry and biochemistry area of concentration is a transfer program that provides the first two years of courses necessary for a four-year baccalaureate degree in chemistry or biochemistry. All students should review the Program Advising Guide and consult an advisor.

Choose one distribution course that also fulfills the Global and Cultural Perspectives requirement.

‡ It is recommended that COMM 108 be taken as the HUMD distribution elective.

How To Apply and Register

MC offers a wide variety of noncredit classes. These courses are designed to help you upgrade your skills, pursue career training, or learn something new.